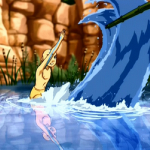 Hi there! Welcome to my userpage! I'm WaterbenderTaikai, but you can call me Taikai for short if you want. I am a huge fan of the Avatar series and I am quite active on this wiki. I am more than happy to help you out if you ever need it. :)

I obviously love waterbending and the Water Tribes (Southern, Northern, and Foggy Swamp). (Go waterbenders!) I have been a fan of Avatar: The Last Airbender for a long time. I watched the whole series on DVD in less than eight short days. I now love The Legend of Korra and never miss an episode. I rewatch episodes online a lot if I have time. I also love the Dai Li after reading a great fanon, Silent Hero in Emerald (I'm the most crazed avid fan). :)

I know, I know. It's a little weird. So here's the story. I read online that "taikai" means "the big ocean" in Japanese, and because it had a "k" in it, I made it my waterbender name. That's that. Though there has been some confusion on how to say the last part of my name, so here you go: "Ty-kai". The 'kai' is said as though you robbed it from 'agni kai'. Okay? We good? Yeah, we're good. :)

So most people write their "Wiki story" describing how they got here and such. I'll do it, but it's not that interesting. Once upon a time... I stumbled across the wiki. I had bookmarked it, but never made an account. Once LoK started I came here again, commenting as an anon. Then I finally made an account on May 26th, 2012. Super fascinating, right?

I became a rollback on July 10th, 2012 after Acer kindly nominated me here. I gladly accepted and 888 gave me the rights several minutes later.

Currently, I am writing Marionette. The plot is described here if you are interested. You can start reading with the prologue and updates are here.

I have another fanon, Parentless. It follows the adventure of Mako and Bolin after the murder of their parents. Read the first chapter, here.

And though I don't know if it counts as 'fanon', I'll put it here anyway. I entered Minnichi's Writing Contest with this battle that I wrote about The Boulder and an original airbender. Don't know if you're interested.

Wanna be friends? Message me! :)

These are a growing compliation of funny things that have happened or said in my time here on the wiki. Enjoy them. :)

"Unstated amounts are always the best!"
―Vulmen successfully getting an indefinite amount of money from me. -_-

"Great issue once again, I would've read in sooner but I was on Google Maps and drafting a map simultaneously."
―Annawan killing me with laughter in response to 888's clever definition in the Urban Dictionary.

"No fanon today?! What's the matter? Afraid I'll redirect it?!"
―The hilarious fourth choice for the second poll in KettleMeetPot's first edition of The Ba Sing Se Times.

"Hmmm...it's 12 years into the 21st century. I wonder when somebody's going to invent a way to "beam" small objects from location to another."
―ARG speaking on the matter of poor technological advances. :)

"KMP, we have to do something about Minnichi. The girl has suicidal tendencies. Constantly talking about death. And ovens. And fires. Perhaps she's possessed."
―Lady Lostris notifying KettleMeetPot of Minnichi's thoughts (which was all LL; note: this is a true story, IRC)

"Anyway, my textbook calls to me!"
―Minnichi on...well, just about everywhere. ;)

Retrieved from "https://avatar.fandom.com/wiki/User:WaterbenderTaikai?oldid=2440469"
Community content is available under CC-BY-SA unless otherwise noted.