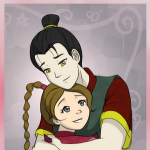 Welcome, all, to my user page! If you have any comments, questions, concerns, complaints, queries, et cetera, feel free to message me on my Talk Page.

In Relation to the Series

I watched the Avatar series from Episode 1 and viewed most of the first season. However, the beginning of the second season kind of got ignored due to disinterest. But I began watching again from "The Library" on, only missing episodes here and there. After watching "Sozin's Comet", I decided to catch up on everything I'd missed. Now I feel like contributing to this Wiki as a fan fiction writer.

While I've seen Legend of Korra, I felt it had so little to offer (and what it did was insulting); it was woefully inadequate as a sequel series and mediocre on its own. So...yeah, I kind of hate it.

- The Lord of the Rings Trilogy

- To Kill A Mockingbird

- Star Wars: The Fate of the Jedi series

My first completed fanon project is here for anyone to enjoy!

My second completed fanon project, Sons and Daughters, is the story of the children of Team Avatar and their adventures in the United Republic, featuring the rise of the Equalists and the Pro-Bending circuit.

My final (maybe) fanon project is underway! Avatar Argho and Co. have to clean up the mess left behind by both Avatar Aang and Avatar Korra. Can they succeed?

Izanagi returns after breaking free of his prison due to the energy released in the prior conflict, and he wants his power back.

A Bird Could Love a Fish

Avatar: The Legend of Rokan

Emblem of the Outlaw

One of Two Ways

Have Yet to Read

Have a fanon to recommend? Drop me a message on my message wall, and I'll get to it when I can.

Zuko is the character who, in my opinion, sees the most growth within the series. Not only does he become a powerful Firebender, he also becomes a staunch ally of Team Avatar. His firebending style itself is only surpassed in sheer awesomeness, in my opinion, by Iroh's. But I feel with the addition of his complexities of character, Zuko barely beats Iroh for my favorite.

Earthbending: I know it's a little strange; one would think that because my favorite character is a Firebender, my favorite bending art would be Firebending. That just isn't true. I like Earthbending because of its diversity, but I feel that the show portrayed it as nothing more than throwing rocks, with exceptions. The most notable is Toph; her bending form is different than most Earthbenders. Her use of varied techniques allows her to outclass many foes, Earthbender or otherwise. Earthbending, in my opinion, is a form with the most potential for variation in technique.

I have said before in a blog that I don't really care about shipping apart from canon; this is still true. So...

- Korrasami. Yep, I said it; I hate this ship. It was the perfect way to cap off the season that jumped the shark, though, so there's that.

Retrieved from "https://avatar.fandom.com/wiki/User:Mageddon725?oldid=2756997"
Community content is available under CC-BY-SA unless otherwise noted.