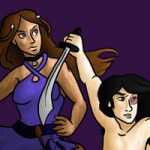 I'm Harpalyce. I've just recently gotten into the Avatar fandom. I'm waiting for my wave of screeching flailing Zuko feelings to subside before I take my time watching LoK, so if I seem a bit ignorant about the newer stuff, that's why!

I'm also a diehard Star Wars fan, a huge Mass Effect fan, and officially the worst thing to happen to the 9 Hours, 9 Persons, 9 Doors fandom. And if you try to wrest that title from me, I will arm-wrestle you for it, possibly while flinging rule 34 doodles at you. Fortunately I do not aim to be the worst thing to happen to the ATLA fandom, so all of you can breathe easy! :D

To just go ahead and admit it - I'm a Zutara shipper. I like to think I do so more sensibly than other Zutarans, and I don't have anything against Kataang, I just like Zutara better. I'm also fond of Borra and Broh as far as LoK ships go, with a nice twist of Lieumon. c:

I can also be found on tumblr (which is sometimes nsfw), deviantart and fanfiction.net and also on AIM under username gadzooksforsooth.

some personal goals for my wiki-ing:

Tanma of the Foggy Swamp

Anyone who seems out to hurt Bear

Her strength mostly lies in her skill of mounted archery. She uses a Mongol-style composite shortbow made of wood and sabertooth moose-lion fang. The most she uses her firebending is usually to light the tips of her arrows on occasion. She is a crack shot, though she is rather useless when it comes to hand to hand combat and close-range fighting. She prefers to fight from a distance. Most of her talent comes from hunting, where she can line up a shot and take her time and then chase down prey for the final kill shot. She uses a Mongolian-style thumb release, and wears a decorated archer’s thumb ring on her draw hand.

Her best friend and companion is an awkward juvenile sabertooth moose-lion. Just to confuse people, its name is Bear. Its teeth haven’t grown in properly since losing its milkteeth, and its sabertooth fangs are mostly awkward stubs, with the rest of his mouth just full of gums with no teeth in sight so far. Bear is actually quite docile and loving, though he tends to like to chew and drool on people out of affection.

Tanma herself is built rather ‘chunkily’ but in a way that shows there’s muscles underneath that cuddly layer of fat. Her natural hair color can be optimistically described as ‘dishwater dirty blonde’, but she regularly dyes it with a herb similar to henna to a bright red. Although she doesn’t care much about the rest of her appearance, she is pretty vain about her hair color. Her eyes are blue and she has quite a few freckles all over the place, especially on her cheeks.

As far as personality goes, Tanma is quite friendly. People write her off as being a bit dumb, but she doesn’t really mind. It’s easier to be underestimated than overestimated! She is very motivated by food and loves discovering new types of cuisine, and will try any type of food once, even when others turn up their noses at it. She is a huge fan of slow-roasted meat - e.g., barbecue.

Retrieved from "https://avatar.fandom.com/wiki/User:Harpalyce?oldid=1739223"
Community content is available under CC-BY-SA unless otherwise noted.