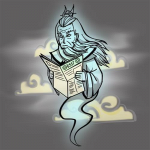 I got into Avatar: The Last Airbender when my former roommate introduced me to it. This was after the series was already completed. I had never even heard of it before then. It started when one of my friends showed me a couple episodes. The first one that I saw was Episode 11 - The Great Divide. I was enjoying myself, so I watched the next one with him - The Storm. I got hooked and the rest was history. I went back and started with the first episode and watched them all the way through. Took me about two weeks to see the entire show. Then I went back and watched some of my favorite ones again.

Retrieved from "https://avatar.fandom.com/wiki/User:AvatarRokusGhost?oldid=2797505"
Community content is available under CC-BY-SA unless otherwise noted.