Avatar Wiki
Register
Don't have an account?
Sign In
Advertisement
in: Protected, A to Z, Episodes of Avatar: The Last Airbender, Real world
English

The Avatar creators made animated Super Deformed Shorts as self-parodies of the series, not to be considered canon. They can be found on the season two Region 1 box set and the season 3 box set in PAL regions. 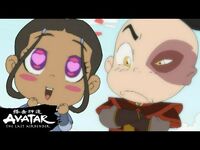 The gang is seen bending in a rock, paper, scissors fashion, saying "One, two, three, BEND!" Toph puts out her hand and bends a miniature pyramid, Aang sticks his hand out and creates a miniature tornado inside his palm, and when Katara puts out her hand she is seen holding a little water pinwheel. Sokka, being unable to bend, sticks his hand out, his thumb and pointer finger bent. He claims it is his boomerang. The others argue that 'boomerang' is not an element.

Using Sokka as their guinea pig, Katara, Toph, and Aang each demonstrate their abilities, each trying to prove that their element is the best. Aang hits Sokka with an air blast and also hits Katara. Katara blasts Sokka into the air with her water, freezes him into a block of ice, and breaks it into small cubes of ice. Satisfied, she fuses the pieces back together.

Toph tells Aang and Katara that air and water are both great elements, but that earth is better. Sokka tries to sneak away, but Toph sends him flying into a makeshift pinball machine formed out of the vertical side of a cliff and into Appa's mouth. Aang saves him, catching him in the air with his bending. Sokka thanks Aang and subsequently remarks that he is "sick and tired of being everyone's personal dummy."

Aang promptly fills Sokka with air, inflating him like a balloon. He begins to float away, but when Appa's horn pokes Sokka's nose, the "puffed up Sokka" explodes. He subsequently crash lands into a pool of water, emerging carrying a fish in one hand.

Zuko and Iroh suddenly appear on top of a cliff. Zuko shouts to them, asking if "[they] call that bending". Katara's eyes turn into hearts and she exclaims that the tiny Zuko looked cute. Zuko becomes enraged and steam begins coming out of his nostrils and mouth, and he yells that he is neither cute nor tiny, and briefly reverts to his appearance in the series. Iroh agrees with Katara, causing Zuko's temper to flare and he shoots a large blast of fire at the gang. The blast hits Sokka directly, causing the fish he was holding to catch fire and cook.

Zuko claims that fire is the best and Toph takes it as a bending battle challenge. She begins to raise mountains out of the earth, in addition to a heart, and when she has finished she shows the others an aerial photograph of the mountains which form a picture of herself. Momo promptly holds up a "7.6" sign, Appa an "8.2", and Iroh claps with amazement.

Aang makes a large ball of air, and using it as a trampoline, launches himself into the air, and while doing so, he breaks a piece of a cloud off and takes a bite out of it. He flies up to outer space, comes back down to earth, and lands on the ground. Momo puts up a "6" sign, Appa an "8", and Iroh shakes his finger in disappointment. Aang points out that through his performance he had made an arrow shape out of the clouds. Momo subsequently flips the "6" over to make a "9", Appa turns his "8" over, even though this did not change its value, and Iroh looks impressed.

A nearby volcano erupts and Zuko is riding the lava. He uses his firebending to make a dragon out of the lava, shouting that he will "bring in the heat". Katara bursts his bubble by riding a giant wave over Zuko's dragon, putting his fire out, and leaving behind a little rock dinosaur created by the fusion of the magma and water.

Iroh says that each element has its own strengths and weaknesses. Sokka eats the burnt fish as Iroh promptly claims fire is the best. He and his nephew make a quick escape, vanishing in a cloud of dust before anyone can argue. 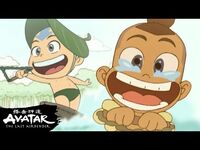 Sokka shows Tho and Due a self-made water filtration device with a hollowed-out pumpkin and leaves on top. Sokka explains that while the swamp water sits in the pumpkin, the sun will evaporate the water. The water subsequently condenses on the leaves and drips into a cup, giving purified water. Just as Sokka finishes his explanation, Aang passes by swamp skiing in the river and creates a massive wave that soaks Sokka and destroys his water filtration device. Sokka wants to rebuild it, however, Tho informs him that Aang was challenging him to a swamp skiing throwdown and how Sokka should be doing more "manly" activities like that instead of "playing with pumpkin juice". Together, Tho and Due prepare to teach Sokka the sport.

Initially, Sokka's attempts at swamp skiing do not turn out well. They often end up with him falling over and/or losing his trunks. During these attempts, Aang boastfully passes by Sokka, and even once is seen swamp skiing with Katara, Toph, Momo, and Appa.

Finally, on the last attempt, Sokka feels that he has gotten the hang of it, yelling out cheerfully, "I love swamp skiing!" Aang passes by on Sokka's side, and he waterbends a ramp in Sokka's path which sends him flying in the air and slamming into a tree, Sokka mutters grumpily, "I hate swamp skiing", followed by Slim the catgator eating his shorts as Tho declares that what they did was a throwdown.

Many of the series' young characters, including Zuko and Jet, are in a class. Aang is feeding a small serpent that looks like a mere seahorse. Katara is writing something on a paper when Azula, Mai, and Ty Lee sneak up behind her. Deciding to pull a harsh prank, Azula shoots lightning at Katara, and she, Mai, and Ty Lee begin laughing at the effects dealt to Katara. At that moment, Roku flames in, informing the class about the upcoming "Golden Dragon Dance" and vanishes in flames. Sokka is torn over who to take: Suki or Princess Yue. The former shows her heart while the latter shows three conjoined hearts. Suki argues that she saw him first and pulls out her fans; Yue, in a deep voice, threatens to use her moon powers. The two girls begin to fight over Sokka. 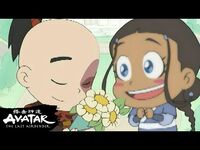 Aang has his eyes on Katara, but has to compete with Zuko, Jet, and Haru, who are all attempting to woo her. The four boys run each other over while running on an athletics track, all competing for Katara's attention. Aang tries flying a note over to Katara, but she mistakenly assumes it came from Bumi and rips it to pieces. After these two failed attempts, Aang gets counseling from Iroh, who is the guidance counselor. Iroh poetically speaks about how the clouds change shape, giving Aang an idea.

Outside, in the parking lot, the boys attempt to win over Katara: Jet puts his hook swords in the shape of a heart; Zuko, on top of his komodo rhino, firebends a fiery heart; Haru earthbends a statue of Katara. She is impressed but tells him that he is too sensitive for her. Ty Lee appears and says that she likes sensitive boys, hearing which Haru changes the head on the statue to her head and they kiss, as the statue watches, blushing. Momo, sitting on Appa with Katara, pulls on Katara's shoulder and points at the sky. Aang, with Teo's help, makes a message in Chinese in the sky, with the English translation written below, asking her to go to the dance with him. Katara admits that it was sweet and that she would love to go to the dance with him. Aang is happy until she says that she already agreed to go with someone else, leaving Aang depressed. The other three boys think that it is one of them and become excited. It is instead revealed that Katara decided to go to the dance with the Blue Spirit, Zuko's alter ego, since she always preferred the quiet and mysterious type. Zuko admits that "[he] did not see that coming". All the three boys become dejected as Katara and the Blue Spirit skip off into the sunset.

Main article: Writing in the World of Avatar