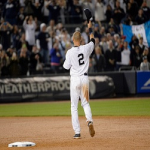 70,634 Edits since joining this wiki
February 3, 2011
0 Discussion posts
Please visit this page.
Thank you all for an incredible experience on this wiki. I wouldn't trade these past 4 1/2 years for anything. I wish you all the best of luck in your future, both on and off-wiki. Perhaps I will see you along the way.
And now, in the words of the late Edward R. Murrow, good night, and good luck.
PSUAvatar14 Want to have a word?