Avatar Wiki
Register
Don't have an account?
Sign In
Advertisement
in: Protected, A to Z, Energybenders,
and 3 more
English

The lion turtle, honorably referred to as Ancient One by the spirits,[1] is the largest and oldest known animal in the world. In the era of Raava, lion turtles populated the Spirit Wilds, where they served as protectors of mankind by housing human cities on their backs.[2] As indicated by the symbols on their foreheads, each individual lion turtle showed an affinity for one of the four elements and possessed the ability to grant individuals the power to control said element through energybending.[1] When the era of the Avatar began, the lion turtles relinquished their roles as protectors of mankind and started to roam the world. However, by 100 AG, the lion turtles had been hunted to near extinction save for one individual.[3]

In the era of Raava, humans developed a relationship with the lion turtles, later establishing settlements on their backs as a means of protection against spirits who roamed the Spirit Wilds. Due to their role as protectors of mankind, lion turtles ascertained the safety of humans who ventured away from the cities to gather food by granting them with the ability to bend an element, which they would relinquish upon their return. As solitary creatures, lion turtles rarely interacted with other members of their species, which resulted in the complete isolation of individual settlements from one another to the point where humans were unaware of the existence of other lion turtle cities.[2]

Around 9,832 BG, a group of hunters approached the fire lion turtle upon which they had built their city, who bestowed upon them the power of fire to find food for the village in the Spirit Wilds. Among the company was Wan, who had sneaked back inside the city without relinquishing his power, which was against the law. After misusing it in a failed raid, he was brought before the lion turtle, who banished Wan to live in the Spirit Wilds but permitted him to keep his fire as a means of protection. During his banishment, Wan befriended the spirits and learned about the existence of other lion turtle cities, which he set out to find. Inspired by Wan's success at surviving in the wilds, many other villagers requested the power of fire from the lion turtle and left the protection of the city to establish settlements in the Spirit Wilds.[1]

During his travels, Wan came across harvesters with the power of air and followed them to a city on top of a flying lion turtle. Following an attack by dark spirits on the air lion turtle's settlement, Wan undertook the task of helping Raava defeat Vaatu during the next Harmonic Convergence. In order to do so, he requested the power of air from the lion turtle, who was reluctant to grant him the ability as no human had previously held more than one element. After agreeing to allow Raava to hold the element until he mastered it, Wan left the air lion turtle's city in order to find the other lion turtles that could grant him with the remaining elements. Over the course of the next year, Wan found water and earth lion turtles who provided him with the power of water and earth, respectively.[1]

After Wan and Raava merged permanently to defeat Vaatu, the lion turtles collectively decided to relinquish their role as protectors of mankind to the new Avatar and refrain from further granting the power of the elements to humans.[1]

Era of the Avatar

Lion turtles were hunted to near extinction over the thousands of years following the start of the Avatar Cycle until only one remained.[4] In order to protect himself from being hunted, the last remaining lion turtle opted to travel the world, away from human civilizations. Having developed a lush forest on its back over the course of its lifetime, the lion turtle avoided human contact by appearing as an island until he encountered Aang on the shores of Ember Island in 100 AG. The young Avatar stumbled onto the lion turtle subconsciously in the dead of night and awoke the following day, unaware of his whereabouts.[3]

After convening with his past lives regarding the course of action he should take to defeat Fire Lord Ozai, Aang discovered that the island on which he believed himself to be stranded was a lion turtle and proceeded to ask the creature for advice. After noting that darkness always yields itself to purifying light, the lion turtle imparted Aang with the ancient art of energybending, stating that individuals originally bent the energy within themselves as opposed to the elements. He warned Aang that the use of the art requires having an unbendable spirit, before leaving the young Avatar and Momo on the shores of the Earth Kingdom near Wulong Forest.[5]

The majority of the lion turtle's body resembles the anatomy of a turtle while the face, paws, and tail are similar to those of a lion. The creature has webbed feet with finger joints made of soft tissue, similar in function to joint covers present in crabs.

Young lion turtles are significantly smaller in size than the adults but are still considerably large, growing to the size of an adult flying bison. Lion turtles can survive for centuries if unharmed and reach the size of a small island, developing hard shells that eventually grow plant life that can sustain several species of animals.[6] This effectively creates small ecosystems on the backs of lion turtles, which neither benefit nor harm the hosts in question.[7] Lion turtles are so enormous that their hearts can weigh over 120 tons, which is comparable to the combined weight of twelve flying bison.[8]

Although from the same species, lion turtles have distinct markings on their foreheads indicating the element to which they are attributed:[1]

Unlike many other creatures in the world, lion turtles are intelligent creatures who demonstrate the ability to both speak and understand human language.[3] They are solitary creatures that disperse as much as possible and remain hidden through various means.

Terrestrial lion turtles buried themselves in the ground and did not surface unless summoned, while aquatic lion turtles partly submerged themselves underwater to avoid detection. Lion turtles associated with air had the ability to fly and remained afloat for additional protection.[1]

The lion turtle bears a strong resemblance to both of its namesakes, the lion and the turtle. Most of the creature's anatomy is based off the body of a turtle, with the head, limbs, and tail similar in appearance to a lion. 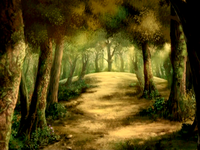 A lush forest grown on the last lion turtle.