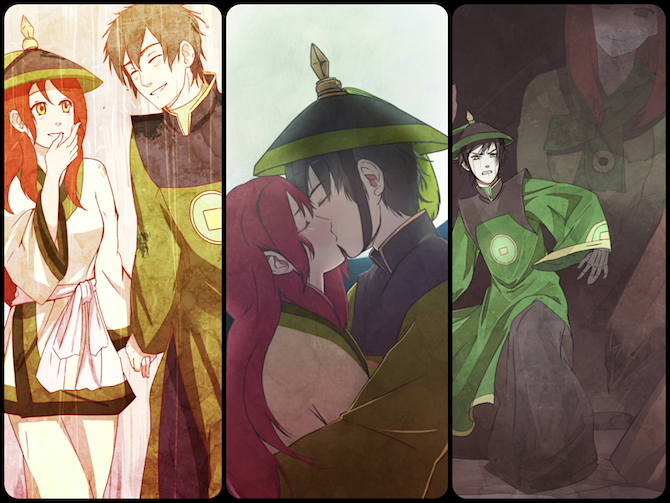 Ba Sing Se is kept balanced by the Dai Li. Under the strict eye of Long Feng, talk of war and even the slightest whisper of rebellion are silenced immediately by the elite earthbenders. Brainwashing, imprisonment, execution, and anything else is fair game to maintain order. Disruptors of the peace must be eliminated at once.

Yuhan, a highly talented converter (brainwasher) of rebels, has never found issue with the Dai Li's politics. Without much of a social life beneath Lake Laogai anyway, he's become one of the best controllers of balance and lives to preserve the clueless city. Everything changes when a childhood friendship reunites him with his past - and blooms into love. Suddenly, life can be more than brainwashing and terrorism.

It wouldn't have been so bad if the Dai Li hadn't deemed her a disruptor of peace.

Illustrations in this fanon (including the main image) are possible because of the epically talented artists there are at deviantart.com and the remarkable generosity they've shown towards me, so I'll take a moment to glorify them first on this page. You'll also see some less attractive drawings that appear as captions from time to time, but those are just my own doodle attempts xP 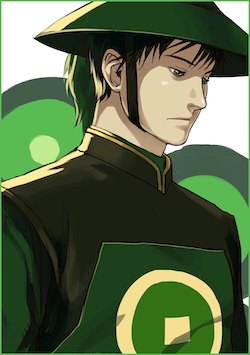 He's one of Long Feng's favorite brainwashers, and the Dai Li make great use of his talents by sending him off to work on 2 to 3 hours of sleep. He's modest and doesn't complain, more of an observer with a freakishly sharp perception of others. His analytic skills helped shape his earthbending into something formidable even by the Dai Li's standards, and you couldn't ask for more in an agent. Among the things you don't really ask for, though, is social awkwardness outside the job, a tendency to get anything fancy ruined, and death threats at random objects; a sleep-deprived mind is never predictable. Yuhan is as weird a Dai Li agent as he is a super-agent, a precarious contradiction that doesn't escape Long Feng's notice.

NOTABLE NOTE: The "-han" in "Yuhan" is pronounced like Han Solo! Some readers have misinterpreted it as the A sound in "pan," so just a heads up. 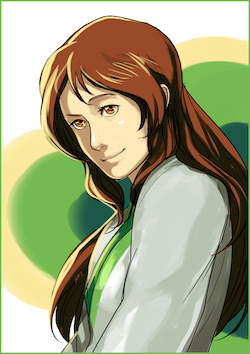 An orphan born of the Lower Ring. She grew up in the company of her immigrant neighborhood and has made herself plenty of family in her tight-knit community, seemingly unfazed by a life of poverty. Having witnessed her birth parents fall to the plague and her foster parents disappear before she even turned 13, she respects the need to keep to oneself and does not pry. Shy and soft-spoken, Riya extends a kind, gentle hand to others in light of her lonely past. However, she fiercely believes in the authority of her city and won't hesitate to stand up to anything she considers an injustice. This makes her a pretty favorable citizen as far as Dai Li agents are concerned. For now. 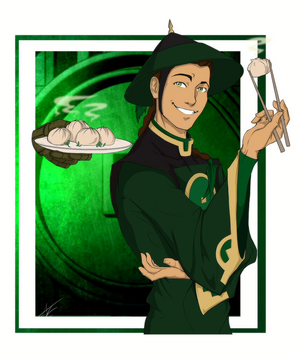 Yuhan's assigned patrol partner and annoying friend (though he knows that Yuhan just won't admit they're besties). He'll take any chances to avoid duties and do the absolute minimum, but he doesn't fall short of Long Feng's expectations. His fellow agents consider him a pretty chill 'Hitman,' more approachable than Yuhan but ominous in his own, disturbingly cheerful way. Hiroshu balances life in the Dai Li with the fun of everything else (particularly food) and seems to be enjoying himself. He doesn't like taking anything too seriously, but he's still a pretty dependable companion overall...only when it's needed, of course.

For those of you interested, here's the full list in HD resolution of all the professional artwork this story's been blessed with. My friends continually blow me away with their talents and crazy generosity, and I encourage you to check out the rest of their work on DeviantArt.com.

Feel free to add yourself if you're interested ^^ Or just let me know. Subscribers will receive chapter update messages on their walls and sneak peaks of future chapters. I may occasionally ask if it's a scene I should throw out, too (I typically trash a load of them before I decide what the finished chapter should be :P).

To date, the longest ever update in this story took place from:

I apologize in advance for these delays. To be a reader of this story is to suffer the consequences of 12+ months waiting for the next chapter :X I try my best not to disappoint, though! Thank you to all who have been willing to endure it. Note that chapters are rewritten constantly between updates, too, so read them again from time to time for refreshers - you might see something new!

For the collective works of the author, go here.

Retrieved from "https://avatar.fandom.com/wiki/Fanon:Silent_Hero_in_Emerald?oldid=2768846"
Community content is available under CC-BY-SA unless otherwise noted.