Crossfire is a fanon conceived and written by Omashu Rocks, the author of Avatar Brek and Political Animals. It has also been nominated to receive a Double-Fanonbending status.

My name is Nalia, and I'm both my government's deadliest weapon and an enemy of the state. My entire life I was trained by my father, a once renowned and feared Fire Nation general, to kill any enemy without breaking a sweat, but those days are behind me. One year ago, the Fire Nation military, under the orders of our pathetically imbecilic Fire Lord Sozin, disrupted my life and destroyed everything I loved. My father was murdered point blank by the same men who captured me and my sister. I was given an option: I could either have had both of us executed along with our dad, or I could have joined the Fire Nation's most elite warriors, lethal assassins meant to terminate any member of the government or military who showed signs of opposition to The War. I chose the latter, and ever since I've been Sozin's personal attack dog, silently taking out anyone he felt posed a threat to his ambitions, enemies both foreign and domestic. While I was running around the world shedding blood and taking lives, my sister remained imprisoned to remind me what I would lose if I were to disobey. If I ever wanted to see freedom again, I had to earn it one body at a time. My ultimate goal: to make Sozin regret the day he made me an orphan. It's simple. He shaped my life, so I'll end his.

Do not judge me for what I have done. If you wouldn't do the same things to protect your sister and avenge your father, then you owe them an apology.

Crossfire is January's Featured Fanon Series! Thanks to AvatarRokusGhost for the nomination!

What's this? A theme song for a fanon? That's right! I selected "Tornado" by Little Big Town to be Crossfire's theme song because it perfectly summarizes Nalia's attitude towards those who get in between her and her freedom. 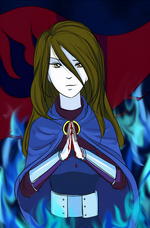 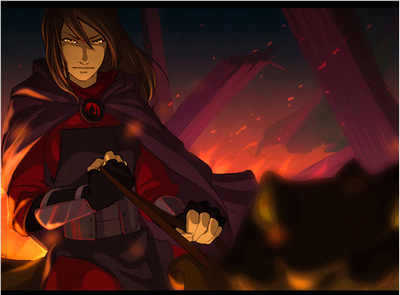 Want updates whenever new chapters are released? Just sign up below!

Fan of Crossfire? Copy {{User:Omashu Rocks/CrossfireFan}} onto your page and you'll get this snazzy box!

I am very grateful for AvatarRokusGhost for nominating Crossfire to receive Fanonbending status.

I'd just like to express my gratitude to Minnichi, a good friend and a fantastic illustrator. She went through the trouble of drawing that amazing picture you see at the top, and she deserves to be commended for her work.

For the collective works of the author, go here.

Retrieved from "https://avatar.fandom.com/wiki/Fanon:Crossfire?oldid=2772594"
Community content is available under CC-BY-SA unless otherwise noted.