Avatar Wiki
Register
Don't have an account?
Sign In
Advertisement
in: Protected, A to Z, Bending arts
English

Energybending[4] is the ability to bend another person's life energy. It predates the four main bending arts, the formation of the four nations, as well as the creation of the Avatar.[2]

Before the Avatar came into existence and the separation of the four nations, the lion turtles bent the energy within humans and themselves in order to grant them the ability to bend one of the four elements. However, after the lion turtles renounced their roles as protectors of mankind, energybending was no longer used to grant people bending, and the knowledge of energybending was almost completely lost.[5] By 100 AG, there was only one lion turtle left with the ability to energybend who later passed down the ability to Avatar Aang,[2] who used it to remove Phoenix King Ozai's firebending[1] and, twenty-eight years later, Yakone's ability to waterbend.[6] After the Equalists' leader, Amon, severed Korra's bending, save for her airbending, Aang's spirit used energybending to restore her ability to bend all elements and passed on the knowledge to her. Later, Korra used it to return Lin Beifong's ability to earthbend[3] and stop Kuvira's spirit energy cannon.[7]

The capabilities of energybending are not well understood; what is known is that bending a person's life energy can impart them with knowledge instantly, remove their bending completely, or restore it. This bending art can be perilous to the user,[1] which is why so few have ever used it. In addition, even though mastering the four elements is a necessity for the Avatar, learning energybending is optional.

In the era before the Avatar, the lion turtles were the only known practitioners of energybending, using it to bestow upon humans the ability to bend one of the four elements as a means to protect themselves while they hunted in the Spirit Wilds and withdrew it after they returned to the settlements on their backs, as bending was not permitted there.[8]

Era of the Avatar

With the rise of the Avatar, lion turtles denounced their roles as the protectors of mankind and bestowers of bending with energybending. Gradually, their population dwindled until only one remained, and thus, the knowledge of energybending was almost lost to the point that it was never heard or spoken of again.

While searching for a way to defeat Ozai without killing him, Aang had a chance meeting with the last remaining lion turtle and, acknowledging the ancient wisdom of the creature, sought its advice on his predicament.[2] The lion turtle answered that "The true mind can weather all the lies and illusions without being lost. The true heart can tough the poison of hatred without being harmed. Since beginning-less time, darkness thrives in the void but always yields to purifying light." The lion turtle brought up a paw, his two claws touching Aang's chest and forehead, causing a green light to illuminate as he imparted the knowledge of the art of energybending to Aang.[2]

During the battle with Ozai, Aang eventually managed to corner and then place his thumbs on the Phoenix King's forehead and chest respectively, mirroring the paw placement of the lion turtle. While doing so, he remembered the lion turtle telling him that in the era before the Avatar, they did not bend the elements but the energy within. However, in order to bend another's life energy, their own spirit must be unbendable, or they would be corrupted and destroyed.[1] As this was happening, Aang's entire body glowed white and blue, while Ozai's shone orange and red, revealing their life energy. At first, Aang's spirit was nearly enveloped by Ozai's, but at the last moment, his spirit took over and covered the firebender's, stripping the Phoenix King of his firebending and securing final victory over the Fire Nation, ending Ozai's reign. It was Aang's "true heart" and "true mind", tested in the heat of battle at the moment of striking down Ozai, that allowed him to harness the wisdom of the lion turtle and successfully energybend the Phoenix King.[1]

In 128 AG, Aang attended the trial before the United Republic Council of the bloodbending criminal Yakone for his crimes in Republic City, who was found guilty and sentenced to life in prison. Hearing the verdict, however, Yakone used his psychic bloodbending to subdue everyone present and escape. Aang, having used the Avatar State to regain consciousness, managed to catch up but was once again overpowered by Yakone's bloodbending. In mortal peril, Aang entered the Avatar State once again and swiftly trapped Yakone in a mound of earth, allowing him to get close enough to take Yakone's bending away.[6]

In 170 AG, after a confrontation with Amon in which he severed Avatar Korra's bending, Korra lost all hope of ever bending all elements again after even Katara, renowed as the world's greatest healer, told her she could not counter the effects of Amon's bloodbending. Desperate and devastated, Korra retreated to a desolate cliff by herself. At her lowest point, she unknowingly summoned Aang's spirit, who ended up not only restoring her bending, but also imparting her with the knowledge of energybending. Korra subsequently used the technique on Lin Beifong, effectively restoring her earthbending.[3] During the following months, Korra also restored the bending of everyone else victimized by Amon in Republic City, with the exception of Triad criminals.[9]

After Raava had been separated from Korra and been destroyed by the Dark Avatar, Tenzin suggested to Korra that she enter the Tree of Time's cavity and bend the energy within herself. Korra did so and managed to tap in to the cosmic energy of the universe and her own spirit, emerging as a massive astral projection made of blue light. With this form, she combated the Dark Avatar and extracted Raava from him, before spiritbending the Dark Avatar, effectively dissipating him.[10]

In 174 AG, Korra was confronted with spirit vines that had turned hostile as a reaction to Kuvira harvesting the roots of the banyan-grove tree. Finally reconnecting with Raava in the Spirit World, she managed to track down the trapped souls of Jinora, Ryu, and several others in the Spirit World, and learned from Raava that she was at her most powerful in the Spirit World, since she was connected to all the spiritual energy there. Being told that she needed to bend the energy within, Korra entered the Avatar State, placed her hand on the vegetative capsule in which the spirits of the victims were being held, and started to bend its energy, slowly dissipating the sphere in a golden light and releasing the souls.[11]

Not long after, during the invasion of the United Republic of Nations, a beam from Kuvira's spirit energy cannon threatened to kill Kuvira and cause massive damage after it had spiraled out of control due to drawing too much power from the vines in Republic City's Spirit Wilds. Korra jumped in front of Kuvira, entered the Avatar State, and used energybending to divert the beam's course. The clash of energy caused an explosion of such magnitude that it tore open a new portal between the mortal and Spirit World at the heart of the capital.[7]

There are four known applications of energybending:

Tapping into the vast expanse of cosmic energy with the help of the Tree of Time, Korra was able to bend the energy within herself to create an astral projection of her spirit. Despite not having been bound by a corporeal form, the projection was able to both inflict and sustain great physical damage and utilize bending. This astral form was also capable of firing a beam of light similar to that of Vaatu's. Although just a projection, due to being spiritually connected to the user, it is also affected by spiritbending.[10]

Energybending can be used to bestow an individual with the power of bending. During the era of Raava, different lion turtles used this power to give inhabitants of their respective settlements a bending power when they left their home to gather food.[12] In 170 AG, this ability was used by Avatar Aang to restore Avatar Korra's bending, and Korra herself subsequently used it to restore Lin Beifong's bending, both of which had been severed by Amon.[3] The lion turtles, however, are the only energybenders known to grant born nonbenders bending abilities.

An energybender is capable of removing a person's bending permanently, unless restored by an energybender. During the era of Raava, different lion turtles used this power to remove the granted bending ability from the inhabitants of their respective villages after they returned home from gathering food.[12] Aang later used this as well to remove Ozai's firebending[1] and Yakone's waterbending.[6]

It is the ability to manipulate energy originating from the Spirit World. Korra first used this technique to manipulate the energy of the pods encasing Jinora, Ryu, and his tour group after they were captured by hostile spirit vines.[11] She later employed the same technique in the mortal world to deflect a lethal beam of energy fired by Kuvira's spirit cannon and save the metalbender.[7] 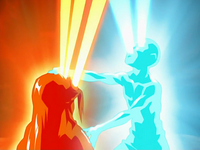 Energybending is an extremely powerful and potentially dangerous technique. If the bender's spirit is even slightly bendable, they will be infected by the spirit of the one they are bending. As a result, the bender can be corrupted and even destroyed.[1]