Ok I might be stupid or something but idk how does Ming-Hua even bend without hands. Also Hi I'm new to this Wiki.

... when you watched ATLA but even tho blodbending existed, lightningbending was portrayed as the scariest subbending form?

Which natiin would you be a part of based on their philosophies? Or just based on which you think is cooler, idk. I'd love to be in the Fire Nation.

How far does it stretch? Like, what are her limits? Actually, what are the limits to anyone who has seismic sense? But I'm specifically asking about Toph since it's her way to "see" the world, with no alternative so it's stronger bc she relies on it more. Like, can Toph see the whole continent she's standing on?

Bc they're clearly more than just kids' shows.

(edited by BubblePop205)
Avatar: The Last AirbenderThe Legend of Korra

WaterbendingFoggy Swamp
King Bumi
Avatar Kyoshi (no AS, earthbending only)

I like Hello Future Me, Antoine Bandele, and Overanalyzing Avatar.

I'm sure you all remember Koh the face stealer. But now I have a question.

Koh was threatening to take Aang's face in the first season. I wonder though, if he suceeds in taking an avatar's face, does that count as death? Would the avatar be reborn if their face is stolen?

Technically if there is iron in us and earth in iron does that make bloodbending possible with earthbending?

In the Fire Nation, it's pretty clear that talent in bending is supported and necessary to success. The royal family, almost all mentioned nobles, and everyone who is really important can firebend, and can firebend well. Except for Mai and Ty Lee. This is so weird to me. Azula's two best friends, and really her only friends, are both nonbenders. Anyone have any thoughts on why?

If [some character] was the avatar, they would definitely…

It's about how Korra's skills are underrated. Feel free to say your opinion in the comments, but pls pls pls try to keep them respectful so the post won't get locked. Okay, here goes:

Them: People always say aang is a better bender than Korra and most of them say that because they're biased and like ATLA more. Korra could literally bend 3 of the elements with 0 training so I don't get it. She was a better bender and more powerful than he was (Aang wasn't a fighter so he wasnt powerful in battle without the Avatar State, while Korra was extremely powerful without it ((Note: I'm not sure which one is really the better fighter, since their time periods focus on different styles of bending like power vs precision and their personalities, but I'll get to that in a bit.))) or like they'll say aang and Korra are basically the same person (bc of Raava's spirit) as if they're not their own person with their own skills and their own story. Some people hate Korra because her show was underfunded and they grew up with Aang, so seeing an Avatar so different from him, they immediately didn't like her even though at the end she's so much more like Aang because she learns through her experience with Zaheer and Kuvira to be more understanding and compassionate.

Me: Yep. In Aang's time, benders focused on sheer amounts of their element, while in Korra's time, they focused more on precision. I'd also like to point out to those ppl that Aang's journey was more focused on the actual bending or the physical part of being the Avatar, since he was already spiritual. It's the opposite for Korra. So just bc her bending training isn't shown as much, it doesn't mean she's weaker. Like you said, she was already starting to bend 3 elements from a young age, which shows her raw, untrained power. While I think Aang and Korra excel at different parts of bending, I don't think Korra is weak.

Them: EXACTLY. And like whenever I try to point out Korra's power when it comes to like physical bending and how Aang wasn't as powerful with that ppl start getting heated since they hate on Korra for no reason. Aang never would've been powerful in the same way Korra was, it's a fact. Aang didn't believe in violence and therefore he was never going to allow himself to get powerful at bending in the way Korra was. Korra wasn't good at the spiritual stuff. But like each of those things brought problems because when Aang was Avatar (like after he was frozen) the world needed a fighter, and Korra's time needed someone like Aang, a mediator and someone who was going to try to show compassion and talk things out before fighting. But they both learned throughout their shows how to be what their world needed without giving up their own values.

((Okay, little note on that last bit: Idk how much raw power Aang would have if he truly unleashed himself (we saw a bit of it in the ATLA finale), but Aang's moral values are too strong for him to use power and violence as the solution most of the time.))

I'm including a video that explains the above point: 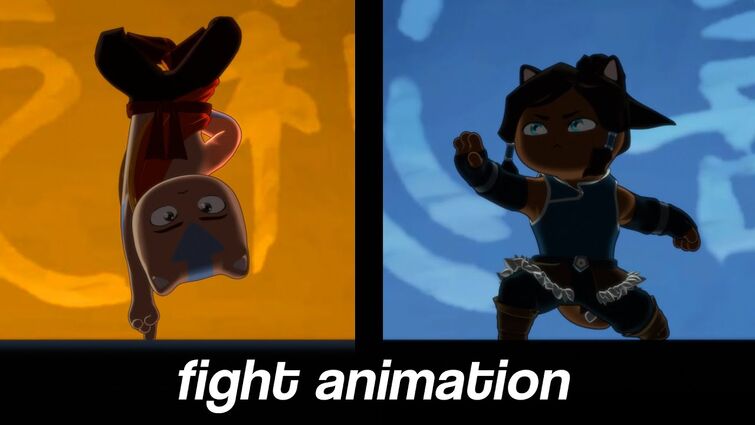 Animator shows what it would look like if AANG fought KORRA - Avatar: The Last CATbenderYouTube

Also, I feel the need to point out that Aang in the Avatar State has boosted power PLUS all the skills and wisdom from past Avatars, while post-Season 2 Korra only has her raw power boosted.

... we got like a mini-series of day-to-day life in the four nations? With minor and/or political conflicts, but nothing life-threatening. I'd really like that, but it probably won't happen.

So a friend from another wiki that I'm on asked me a good question. Why are the nations color-coded? Who decided that and when? How do the Water Tribe peeps have blue clothes if they use animal skin? What about in Korra's days? How come Firebenders still wear some red, Earthbenders wear some green, and so on? Just wanted to know your thoughts and opinions.

The Legend of KorraFour nationsFashion in the World of Avatar
Guidelines