Hello everybody. My ship today is Rangshi. I should warn everybody that I only have two Kyoshi novel ships left after this and they are both pretty minor. 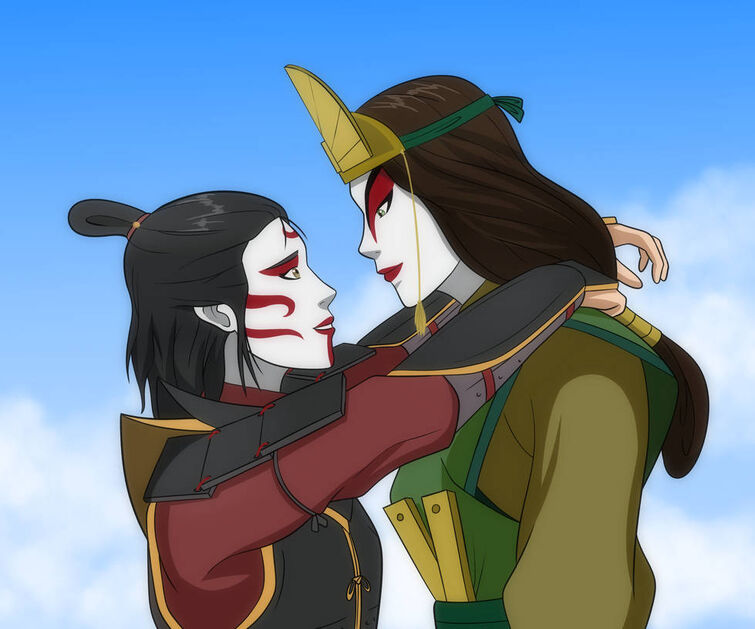 Kyoshi and Rangi know each other through working for Yun who was thought to be the Avatar at the time. Rangi was one of Yun's bodyguards while Kyoshi was his closest servant. The three of them were close childhood friends. Everybody changed when Jianzhu seemingly sacrificed Yun to a spirit and killed Kelsang. Rangi had trouble believing her story at first but left with her because she did not want Kyoshi to run off on her own. They joined a daofei organization known as the Flying Opera Company which Rangi was hesitant about. She participated in a dangerous le tai in order to show Kyoshi the fear she was constantly putting her through. After talking it out, Kyoshi kissed Rangi, but she pushed her away because that part of her face was bruised and told her to kiss her somewhere she was not hurt.

Kyoshi and Rangi's relationship continued but they were eventually forced to go their separate ways for a while when Rangi's mother Hei-Ran was nearly poisoned to death and needed to be healed. They were reunited in the Fire Nation at the Festival of Szeto. Some drama occurred between them when Yun attacked at the ball and escalated even further when Hei-Ran was nearly killed by him in North Chung-Ling. Rangi stormed out, saying that she was no longer anything to Kyoshi, but brought her some noodles she cooked minutes later. They later fought Yun in a final confrontation and Rangi was stabbed. Kyoshi finally brought herself to kill Yun and used the Avatar State to pull water out of a well and heal Rangi. They later buried Yun on a hill and promised that they would remain together no matter what the future holds.

Rangshi is a ship that I was pretty much on board with right away. I even loved it just from reading the summaries before I actually read the novels. They just compliment each other perfectly and their playful bickering is cute. The biggest question that fans have is about Kyoshi's daughter Koko. I think that Kyoshi did adopt Koko because it makes sense. Kyoshi was abandoned when she was young and nobody wanted anything to do with her until Kelsang found her. Kyoshi would want to give another orphan the same comfort that she received from Kelsang and not want any child to be left on the street. So I'm sure that she ended up with Rangi and that they adopted Koko. Unfortunately, since Kyoshi lived for 230 years, there is a high chance that Kyoshi outlived Rangi.

I welcome all opinions on Rangshi as well as other pairings involving Kyoshi and Rangi but please do keep comments constructive.

Yay! I'm glad you've made a post about my favourite Avatar ship 😁 I love them so much ❤️ and I totally agree with you that they are a perfect couple and very cute together. Kyoshi and Rangi are my favourite characters and I think that they share the most beautiful, pure, passionate and strongest love, not only in the franchise, but also compared to ships from other universes.

I started shipping them since The Iceberg chapter, before which I shipped Yunshi. After I finished the novels, they became the ship I like most.

This is fan art of kkachi's is so cute and, even if they are stunning regardless of what they're wearing, I love seeing them with the Flying Opera Company make-up!

I'm pretty sad you only have to ships left, but I'm curious which ones they are and I'm looking forward to seeing your posts 🙂

Omg I couldn't agree more! Imo, Rangshi is one of the best ships in the fandom. Also, just a side note, I thought that maybe you should include a spoiler warning for the people who haven't read the novels yet, since the post does include some spoiler information.

One of my favorite avatar ships